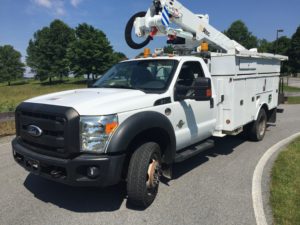 Since bucket trucks first came into being, they have been powered by diesel-run internal combustion engines. In recent years, despite advances in technology, this has held true. The clear majority of bucket trucks still rely exclusively on a diesel engine for power to drive as well as to operate the hydraulic lift. Recently, however, as fuel costs continue to rise, engineers are re-imagining the traditional design, giving birth to the new hybrid bucket trucks.

What is a Hybrid Bucket Truck?

The major difference between a hybrid bucket truck and a conventional one is the hybrid’s second engine. In addition to the diesel engine of a hybrid bucket truck, an auxiliary electric engine, located under the mid chassis section, powers the hydraulic lift.
While driving on the road, the internal combustion engine burns diesel fuel for power. Once on the job site, the electric motor takes over to power aerial tasks. The electric motor is powered by high capacity batteries which provide clean power to the bucket truck’s hydraulics for hours.

If the job requires hydraulic operation for longer than the battery packs can handle, it isn’t a problem.  The internal combustion engine can simply power the system until the batteries can be changed or recharged.

There is little difference in the power and performance of hybrid bucket trucks and their standard diesel engine cousins. However, the use of an electric motor as the main power source for the truck’s hydraulic pump has several advantages.

Fuel consumption is a major expense in running a standard diesel engine bucket truck. The standard bucket truck relies on its main internal combustion engine (or an auxiliary combustion engine) to power the hydraulic system. This means the engine must be running the entire time the boom is deployed, all the while guzzling expensive diesel.

The hybrid bucket truck does not rely on diesel to run its hydraulic system. The engine can be shut off while the boom is in operation, allowing it to run on the energy stored in its batteries. Then the batteries can be conveniently recharged in a regular power outlet overnight and be ready for work the next morning.

It is difficult to estimate the exact amount of fuel savings for each individual utility company. However, the anticipated savings are as high as 60 percent for some fleets.

Internal combustion engines are noisy. Electric motors, on the other hand, run quietly with almost no background noise. Keeping machinery noise levels down on your job site is not only a way to prevent disturbing neighbors, it also allows for easy and clear communication between workers. With a hybrid bucket truck, there will be no more shouting over noisy machinery between the ground crew and the bucket worker. This reduces the risk of job-site accidents as well as saves the voices of your work crew.

Electric engines have fewer moving components than a standard internal combustion engine. Fewer moving parts means fewer things that can possibly break down and need repair. It also means that the engine will need less frequent maintenance, saving you money in the long run.

Electric engines do not emit harmful exhaust gases into the air which is safer for the environment. As an added bonus, it also reduces health risks for your crew. Since the hydraulic system of a hybrid bucket truck doesn’t run the main diesel engine, it eliminates the need for idling. Not only is this good for the planet, but it is also handy when working in communities that have idle laws prohibiting drivers from leaving their vehicles idling for lengthy periods of time.

Do Hybrid Bucket Trucks Cost Too Much?

A hybrid bucket truck can cost as much as $70,000 more than one with a conventional diesel engine. Using a hybrid bucket truck will ultimately save on fuel costs in the long run. However, many companies cannot afford the extra investment needed up front. This major difference in purchase cost is the main reason that hybrid bucket trucks have not gained more popularity in utility industries.

There are some major advantages to adding a hybrid bucket truck to your utility fleet. Even if the initial investment may send you into sticker shock, they are still worth considering.